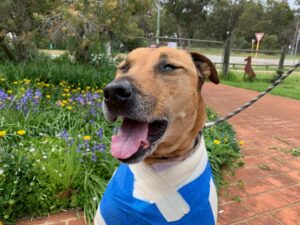 Jedd is a very special boy, who has been close to all our hearts for many years. When he found himself in an emergency situation recently, the MHVC team were ready to do everything needed to save his life!

Jedd literally had a run in with a recently sawed-off tree branch. This led to severe injuries of his left shoulder, with damage to the skin, muscles, nerves and blood vessels of his limb. He was bleeding a dangerous amount from a torn artery. 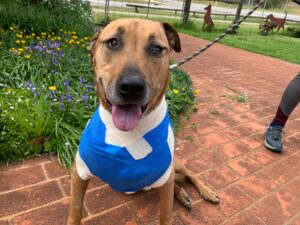 His heroic dad managed to lift him into the car (not an easy feat being a Bullmastiff weighing in at 44kgs!) and came straight to MHVC for treatment.

Jedd was admitted and underwent stabilisation for his shock, including pain relief medications and an IV drip. Once stablised, Dr Jaime took Jedd to surgery to find and repair the source of his bleeding, to clean all debris from his wound and to reconstruct what viable tissue was left.

The surgery took many hours, but Jedd came through it with flying colours! His positive attitude persisted throughout, despite having multiple drains in place and numerous smaller procedures following surgery. He never turned down a liver treat at any visit! 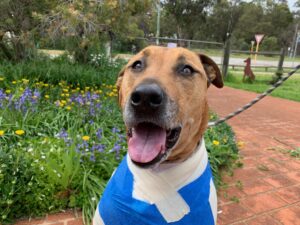 While most of Jedd’s wound healed well, a section of skin had been too badly damaged by his accident and was not able to survive. He underwent another surgery to remove this section. Due to the nature of his injury, Dr Jaime was unable to completely close the wound. We opted to allow Jedd’s body to do the work, as animals have an amazing ability to heal even very large wounds! 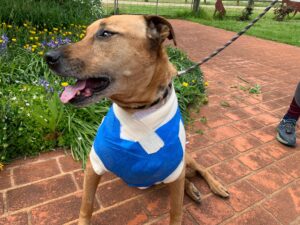 Jedd has been sporting some very stylish shoulder bandages for several weeks now and is doing beautifully! It won’t be long now until Jedd is healed up and back to running and playing normally again.