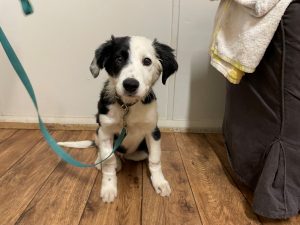 He was adopted with his brother from the same litter named Bill. Dr Jaime first met Bill and Ted for their puppy vaccines and the whole clinic instantly fell in love with the cheeky pair.

A few days following his first appointment, Ted became unwell with abdominal pain and severe lethargy. He is a very sensitive soul and was one very sad puppy, rapidly becoming unable to walk at all.
He was eventually admitted to hospital for testing to determine the cause of his mysterious illness. He was put on a drip and strong pain relief to make him as comfortable as possible.

Dr Tammy and Dr Jaime performed blood testing, x-rays as well as arthrocentesis (joint taps), where the fluid inside the joint capsule is sampled.

This test showed that Ted was suffering from a condition called immune-mediated polyarthritis, also known as IMPA. This is a disease where the immune system becomes overactive due to some sort of immune insult and undergoes a misguided redirection towards the patient’s own healthy cells lining the joints. The joints then become inflamed and excessive joint fluid is produced, distending the capsule and causing significant pain.

Luckily for Ted, this condition is treatable using steroids and other immunosuppressive medications. He responded beautifully to his treatment and within days was up and about again and is as playful and cuddly as ever! Well done Ted, the whole team adores you and we hope you keep going so well with your recovery!