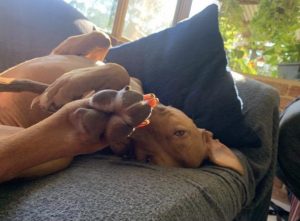 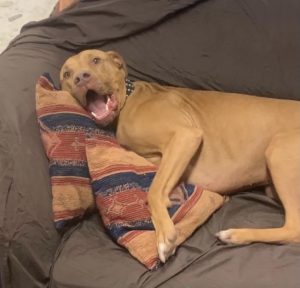 Hercules is one very lucky pup! This handsome boy is 7 years old and the biggest smooch. He unfortunately sustained extensive wounds following an altercation with another dog.

Hercules was then immediately rushed to MHVC for treatment, where he was seen by Dr Jaime. He was super brave and kept smooching everyone caring for him throughout his ordeal, especially Nurse Lee! Hercules suffered several nasty wounds, including a torn bleeding artery, deep bites to his forelimb and head and even a torn eardrum when his ear was grabbed. 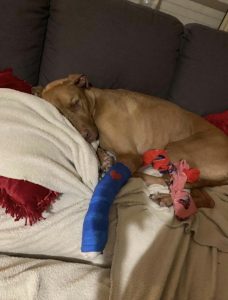 He underwent an emergency surgery to clean out and suture his wounds closed. He has required bandaging to reduce the swelling in his leg, which he has managed like a champ! He has been a delight to see for his bandage changes and is healing up beautifully! Lucky for Hercules he will have a full recovery in the very near future. 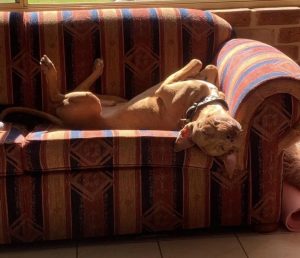 Dog attacks are unfortunately a common scenario, which our vets treat on a regular basis. It is most important that you and the people around you stay safe. When dogs are fighting they can lose inhibitions and also mistake you for the other dog, frequently leading to nasty bites on people trying to break up the fight.

Before trying to physically separate two fighting dogs it is safest to try spraying the dogs with a hose or dumping a bowl of water on their heads. Throwing a large blanket or towel over both dogs, or putting something between the fighting dogs e.g. a garbage can, may also help.

If these methods don’t work you may have to physically separate the dogs, but be aware of the potential risk of injury to yourself. If you are wearing pants and shoes you may be able to separate smaller dogs using your lower body as these areas are more protected than your hands. It is not necessary to kick or hurt the dogs; the goal is to separate them.

If you feel it’s necessary to grab the dogs, you and a helper should approach the dogs together. Take hold of your dog’s back legs at the very top, just under the hips. Avoid grabbing lower as you may cause serious injury. Then lift and move backwards away from the other dog and turn 180-degrees to face away so they can no longer see the other dog. Secure your dog and keep them out of each other’s sight to avoid another fight.

All animals involved should be seen by a veterinarian. Even minor looking wounds can be severe and nearly always require antibiotics, due to the bacteria from the other dog’s mouth contaminating the wounds. Dog bites often look small on the surface, but are akin to icebergs, where there is considerably more damage under the skin surface than can be seen on the outside. Usually if treated early, these wounds will heal without much problem and your dog can have pain relief and a relaxing recovery.