Jaegar is a very sweet 4yo Doberman, who initially presented to Dr Jaime for him biting and chasing one of his paws.
Jaeger was a very stoic patient and was not giving anything away when he was first examined! X-rays of his paw and carpus (wrist) joint demonstrated some mild swelling and osteoarthritis of the joint.
Jaeger was then started on a pain relief medication and anti-inflammatory. However, his case was not that simple! Despite his owner’s dedication to his treatment, he was not improving, and continued to chase and bite his own limb! 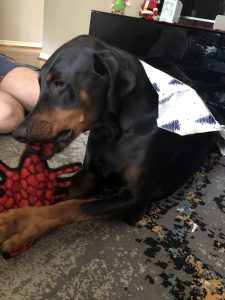 At this point, Dr Jaime was suspicious about him suffering from a psychological condition, which was contributing to this behaviour. Just like in humans, dogs can suffer from many mental health issues, including psychogenic pain (pain that is caused or exacerbated by psychological issues). Jaeger has always been a nervous boy, but wasn’t demonstrating any other obvious signs of anxiety at home that the owner had noticed.
This is not uncommon for our clients to report to us, as many dogs and cats will cover up their anxiety or only have subtle signs, making it harder for their owners to recognise the signs.

After discussions with some professional colleagues and Jaeger’s mum, we chose to start him on an anti-anxiety medication called fluoxetine. This is an antidepressant commonly used in humans, dogs and cats. It works by increasing levels of serotonin (our happy chemical) in the brain, thereby improving mood and reducing stress and anxiety.

The results of this treatment in Jaeger were miraculous! Within 1 week of starting this medication, Jaeger was a new boy! He was back to his happy self and completely stopped chasing his sore paw! He has been much more interactive and bright at home and has had no further issues. 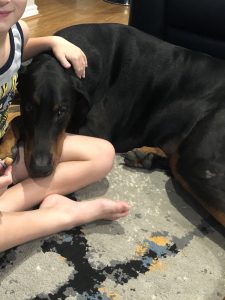 Anxiety in dogs and cats is a condition that is often overlooked. Many people do not realise we have lots of great options for managing this in their pets, from natural remedies, compressive shirts, all the way up to prescription medications in more severe cases. These conditions are complex and often multifactorial, much like mental health conditions in people.

We encourage people to seek advice from your veterinarian, as they will be able to provide you with options for treatment. The most important thing about these conditions is that they are often lifelong, and require long-term consistency and persistence to improve! But there is plenty of hope when it comes to behavioural conditions in your pets, as demonstrated by the very handsome Jaeger! 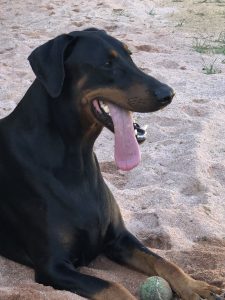