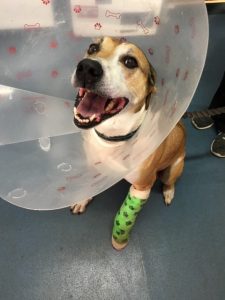 Gulliver is an adorable greyhound cross that was rushed in to the clinic after being struck by a car.

Our initial concerns of him being severely injured were eased when he walked in wagging his tail! However, we were still worried he might have internal injuries, and he had some large wounds to his tummy and left front leg.

Xrays and an ultrasound were done which showed no obvious damage to his organs other than a little bruising to his lungs, and no broken bones.
He was treated for shock and pain and his wounds cleaned and dressed, and spent the night at an emergency clinic for close monitoring.

The large wound to his tummy was able to be stitched closed a couple of days later but unfortunately his front leg wound was too large to stitch. He is currently having bandage changes every couple of days and we’re very pleased with how his wound is progressing.

He still has a way to go before his wounds fully heal but he’s a very brave, lucky boy with a dedicated owner, and he still wags his tail every visit to the clinic!